"Everyone knows that Egypt is the land of the pyramids, those mountains of stone which stand like weathered landmarks on the distant horizon of history. However remote and mysterious they seem, they tell us much of their own story. They tell us of a land which was so thoroughly organized that it was possible to pile up these gigantic mounds in the lifetime of a single king, and they tell us of kings who were so rich and powerful that they could force thousands and thousands of workers or slaves to toil for them year in, year out, to quarry the stones, to drag them to the building site, and to shift them with the most primitive means until the tomb was ready to receive the king.

No king, and no people would have gone to such expense, and taken so much trouble, for the creation of a mere monument. In fact, we know that the pyramids had their practical importance in the eyes of the kings and their subjects. The king was considered a divine being who held sway over them, and on his departure from this earth he would again ascend to the gods whence he had come. The pyramids soaring up to the sky would probably help him to make his ascent. In any case they would preserve his sacred body from decay. 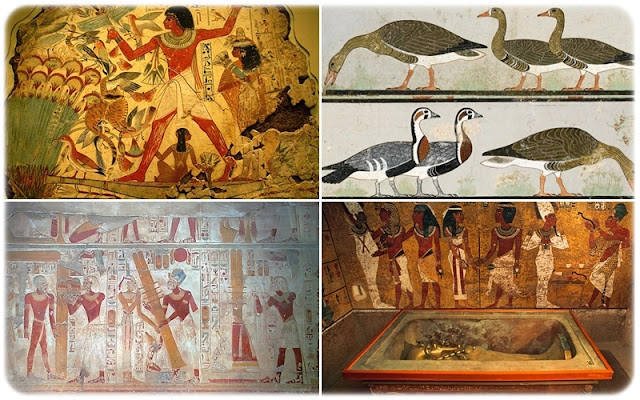 For the Egyptians believed that the body must be preserved if the soul is to live on in the beyond. That is why they prevented the corpse from decaying by an elaborate method of embalming it, and binding it up with strips of cloth. It was for the mummy of the king that the pyramid had been piled up, and his body was laid right in the centre of the huge mountain of stone in a stone coffin. Everywhere round the burial chamber, spells and incantations were written to help him on his journey to the other world.

"But it is not only these oldest relics of human architecture which tell of the role played by age-old beliefs in the story of art. The Egyptians held the belief that the preservation of the body was not enough. If the likeness of the king was also preserved, it was doubly sure that he would continue to exist forever. So they ordered sculptors to chisel the king's head out of hard, imperishable granite, and put it in the tomb where no one saw it, there to work its spell and to help his Soul to keep alive in and through the image. One Egyptian word for sculptor was actually 'He-who-keeps-alive'.

"At first these rites were reserved for kings, but soon the nobles of the royal household had their minor tombs grouped in neat rows round the king's mound; and gradually every self-respecting person had to make provision for his after-life by ordering a costly grave which would house his mummy and his likeness, and where his soul could dwell and receive the offerings of food and drink which were given to the dead.
Some of these early portraits from the pyramid age, the fourth dynasty of the Old Kingdom, are among the most beautiful works of Egyptian art. There is a solemnity and simplicity about them which one does not easily forget. One sees that the sculptor was not trying to flatter his sitter, or to preserve a fleeting expression. He was concerned only with essentials. Every lesser detail he left out.

Perhaps it is just because of this strict concentration on the basic forms of the human head that these portraits remain so impressive. For, despite their almost geometrical rigidity, they are not primitive as are the native masks [discussed earlier]. Nor are they as lifelike as the naturalistic portraits of the artists of Nigeria... The observation of nature, and the regularity of the whole, are so evenly balanced that they impress us as being lifelike and yet remote and enduring. 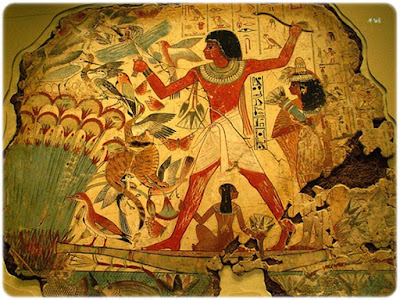 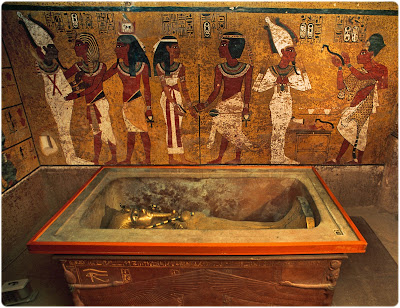 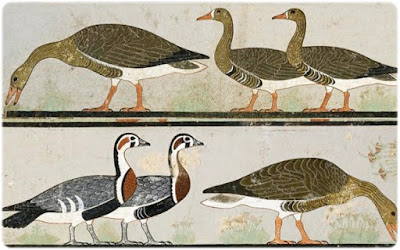 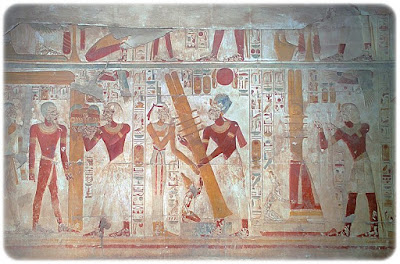 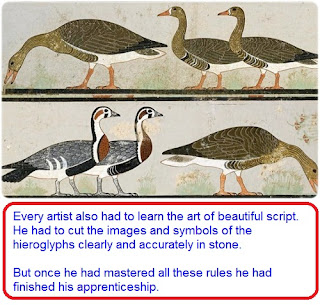 "This combination of geometric regularity and keen observation of nature is characteristic of all Egyptian art. We can study it best in the reliefs and paintings that adorned the walls of the tombs. The word 'adorned', it is true, may hardly fit an art which was meant to be seen by no one but the dead man's soul. In fact, these works were not intended to be enjoyed. They, too, were meant to 'keep alive'. Once, in a grim distant past, it had been the custom when a powerful man died to let his servants and slaves accompany him into the grave.
They were sacrificed so that he should arrive in the beyond with a suitable train. Later, these horrors were considered either too cruel or too costly, and art came to the rescue. Instead of real servants, the great ones of this earth were given images as substitutes.The pictures and models found in Egyptian tombs were connected with the idea of providing the soul with helpmates in the other world, a belief that is found in many early cultures. To us these reliefs and wall-paintings provide in extraordinarily vivid picture of life as it was lived in Egypt thousands of years ago.
And yet, looking at them for the first time, one may find them rather bewildering. The reason is that the Egyptian painters had a very different way from ours of representing real life. Perhaps this is connected with the different purpose their paintings had to serve. What mattered most was not prettiness but completeness. It was the artists' task to preserve everything as clearly and permanently as possible. So they did not set out to sketch nature as it appeared to them from any fortuitous angle. They drew from memory, according to strict rules which ensured that everything that had to go into the picture would stand out in perfect clarity...

"A similar method is often used by children. But the Egyptians were more consistent in their application of these methods than children ever are. Everything had to be represented from its most characteristic angle. [Consider] the effect which this idea had on the representation of the human body. The head was most easily seen in profile so they drew it sideways. But if we think of the human eye we think of it as seen from the front.


Accordingly, a full-face eye was planted into the side view of the face. The top half of the body, the shoulders and chest, are best seen from the front, for then we see how the arms are hinged to the body. But arms and legs in movement are much more clearly seen sideways. That is the reason why Egyptians in these pictures look so strangely...contorted. Moreover, the Egyptian artists found it hard to visualize either foot seen from the outside.


They preferred the clear outline from the big toe upwards. So both feet are seen from the inside, and the man on [a] relief looks as if he had two left feet. It must not be supposed that Egyptian artists thought that human beings looked like that. They merely followed a rule which allowed them to include everything in the human form that they considered important. Perhaps this strict adherence to the rule had something to do with their magic purpose. For how could a man with his arm 'foreshortened' or 'cut off' bring or receive the required offerings to the dead?


"It is one of the greatest things in Egyptian art that all the statues, paintings and -architectural forms seem to fall into place as if they obeyed one law. We call such a law, which all creations of a people seem to obey, a 'style'. It is very difficult to explain in words what makes a style, but it is far less difficult to see. The rules which govern all Egyptian art give every individual work the effect of poise and austere harmony.


"The Egyptian style comprised a set of very strict laws, which every artist had to learn from his earliest youth. Seated statues had to have their hands on their knees; men had to be painted with darker skin than women; the appearance of every Egyptian god was strictly laid down: Horus, the skygod, had to be shown as a falcon or with a falcon's head; Anubis, the god of funeral rites, as a jackal or with a jackal's head.


Every artist also had to learn the art of beautiful script. He had to cut the images and symbols of the hieroglyphs clearly and accurately in stone. But once he had mastered all these rules he had finished his apprenticeship. No one wanted anything different, no one asked him to be 'original'. On the contrary, he was probably considered the best artist who could make his statues most like the admired monuments of the past. So it happened that in the course of three thousand years or more Egyptian art changed very little.


"Everything that was considered good and beautiful in the age of the pyramids was held to be just as excellent a thousand years later. True, new fashions appeared, and new subjects were demanded of the artists, but their mode of representing man and nature remained essentially the same."